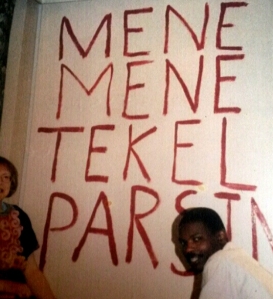 Short on motivation or inspiration for something to write about?  I often am, I start drafts then abandon them.

If that happens I find using a pictorial and/or photographic image that I own might act as a prompt, or alternatively there are many on the internet that inspire me.

Here I’m using a photo of an ‘art work’ I did in the early stages of recovery from ‘breakdown’. Which was long before smart phones, it’s a polaroid…..fading fast.

As one of the last people on admission in the soon to be closed psychiatric hospital, I along with others had been asked to create art ‘on the wall’. Not previously known for my ‘art’ skills, I chose words.

The photograph helps me to remember the sheer determination and slog  it took to recover from the experience of ‘breakdown’, the kindness of some, in this case a male nurse who helped me, and though heavily medicated, the inner voice that helped me be bold enough to write an indictment on the wall of that particular establishment. It felt good, it still does!

I wasn’t making a statement about the staff, for most were kind but was a statement against a society and an institute that uses both invasive and psychoactive medication as the first line of treatment. I think since then there has been some progress in using complimentary and alternative treatment, and much of that change has come from the activism of those with lived experience, often called ‘survivors’. People who continue to tell their truth whether it’s ‘writ’ large or small, in text, verbal or pictorial.

And the writing on the wall? What does it mean? A ‘google’ search might give you an approximate translation but the interpretation of the art is yours and mine.

This site uses Akismet to reduce spam. Learn how your comment data is processed.