In January or February of this year I participated in my second ever poetry reading. I wanted to be involved in this, because I enjoy hearing others read their poems. I also feel a sense of achievement from reading my work to groups as well. It was a surprise on the night of the recital, at least to myself, that I was not moving around awkwardly in my seat in the 10 minutes before meeting the audience. I had feared that I would succumb to nerves which would affect my ability to recite what I’d practiced reading, the whole week before the recital. Thankfully these nerves, never, came. And so it was that with light shoulders, and clear mind, I read three of my poems: Truth, Driver’s Bed Time, and Patch.

I believe now that the reason my confidence was heightened at this second recital, was three-fold. Firstly, I actually knew many of the people in my audience. This was handy as these recognisable faces gave me something to focus on, when I suddenly realised it was my voice that was the sole sound in that room full of people. A second thing that put me at ease was that I was not first to read. Indeed there were other readers before me, which gave me time to compose my thoughts. Despite this, I still hit a cliched ‘sticky patch’. My printer broke down when I was about to print my work! My decision to take photos of my poems with my phone so I could read them, worked! Until I was on stage and my phone took ages to switch on. Thirdly I was more relaxed as I arrived in good time for the start of this event, unlike my first time at a reading when I had been unavoidably detained for the first hour and a half. That time, I had created a movement within an audience who were like chemical particles. This second time however, I took my seat before the event even started, and actually had time to talk to those people I knew.

When it comes to what you hear at poetry readings, it’s true that one is in danger of being seriously inspired and experiencing inspiration overload. One particularly energetic school teacher at my first reading passionately used his physical and vocal presence as a way of engaging the audience. At the second event, we also sat stone still as a woman read a poem whose vivid imagery and detail meant it could only have been about one topic; the Second World War. Another person used one of their poems to tell us about their appreciation for one part of Britain. 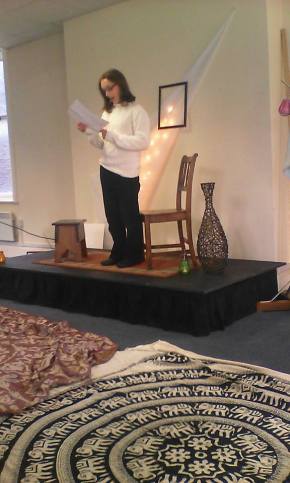 Since the above was written I have read at my third event. This was Women’s Voices Ring Out in Wakefield. I had an amazing evening at this event too since I was on the same bill as about 10 highly talented writers, and once I’d read I was part of the audience that was treated to their array of topics. As was equally true at other readings I’ve been involved in, each poem that the writers showcased at Women’s Voices Ring Out was an inspirational piece of work that had the ability to explore real human feeling and emotion. As before, there also was a mountain of literary treasures: from the works of the writer who reflected on the thoughts of various people in society, to a moving poem about motherhood, to the other beautifully written examples of poetry and song in between.

In conclusion poetry readings are a nice way to be involved in your community and to meet people – whether you’d like to read, or simply listen. Granted not everyone eagerly jumps up at the chance to do public speaking. The great thing about poetry events is that the choice of involvement is wholly personal, and someone can have any level of participation they chose. If you’d like to be a part of poetry readings then you’re sure to take something positive from what you hear, and to grow in confidence if you do share something. Poetry readings are then in my view, ultimately a brilliant use of anyone’s evening. It’s for this reason that I am due to read at my fourth.

Photo source:
Photos by one of the Women’s Voices Ring Out event organisers, Hamila Mayat.

In an idle moment in between juggling a rather unwieldy piece of writing and in preparation for the next stage of her techy know how, one of our regular contributors made the following. It took her less than half an hour and it looked like fun.

Are you sitting comfortably?…then I’ll begin!

Long, long ago, in the days of yore, I was able to sit half lotus just like the magnificent personage here depicted. Some people say sitting lotus style & navel gazing are good for your health!

This sitting pretty, bright and cheery sculpture is an installation, at Yorkshire Sculpture Park, close to West Bretton. Yorkshire Sculpture Park was formerly known as Bretton Park, and was the estate of Bretton Hall. There is an interesting twist in the story of the inheritance and horticultural development of this former stately home. Dianna Beaumont, an illegitimate daughter of one of it’s male owners, inherited the pile in 1792 . In that era property was rarely inherited by female offspring even if they were legitimate, they were overlooked in preference for any, often distance male relative. Diana was

a keen horticulturalist, commissioned a giant domed conservatory, the largest of its kind in the world, which is said to have been the prototype for the Crystal Palace in London. ¹

Another interesting, possibly useless fact, (though it impressed me as a teenager) is THAT wrestling scene between Oliver Reed and Alan Bates, from the film Women in Love, ground breaking in 1969, was filmed at the hall. My short shortsightedness meant that the possibly interesting bits in the scene were blurry and therefore lost on me! Oh, and Henry V111 is thought to have spent three days there, the oak bed he is said to have slept in is now at Temple Newsam. That’s probably not useful information either.

As a young child I considered my family visits to Bretton Park and West Bretton village as far flung in time and space, despite them being only a short distance from our home in Wakefield. West Bretton to this day has neither shop, post office or pub, but its bowling and cricket green make it the quintessential English village.
Too young on my early visits to know what romance was, Bretton Hall’s Camelia House, did strike me as the perfect setting for sitting pretty, tete a tetes. The Yorkshire Sculpture Parks planned re-creation of ‘tea with Diana Beaumont’, (by all accounts a sassy diva) this summer, might provide such an opportunity. The purpose of the event is to highlight the importance of her contribution to the parks horticultural splendor, and to raise funds for Yorkshire Sculpture Park.

By the time I was a teenager I had more idea about romance. Chamber music recitals on the terrace, performances of Shakespeare and Wakefield Mystery plays held in the atmospheric stable block courtyard, all served to inspire and expand my interior and exterior worlds.
Bretton Hall at that time was an Arts teacher training college, later acquired by the University of Leeds Arts Department. Trainee or newly qualified teachers were assigned to the secondary school I attended. The teachers personal interest in we disadvantaged youths, both in school and informally opened our eyes to more culturally diverse lives.
I was encouraged to, and dreamed of one day being a student there. I didn’t so much want to be a teacher, or have a career in the Dramatic Arts but was keen to live on campus and lounge about looking the part! Kohl eyed, patchouli doused, sitting under some tree late into the night discussing all manner of things. My interest in yoga, sitting lotus style and contemplating navel came a few years later, I never found it easy. Nowadays my own style navel gazing might best be described as,…..a trance like slouch on the couch, except when I bethink myself!

When I re-visited Bretton Hall estate after many years absence, it had become Yorkshire Sculpture Park, and my heart sank. Very large abstract sculptures dominated its landscape, I thought they were unsympathetic to it’s natural beauty. However I’ve since learned to appreciate and be more sympathetic to them.

Wakefield, and Bretton Park, as it will always remain to me, still occupy a special place in my heart and memory. I’m a Manygates babe! I now live in, and love Leeds, and have the privilege to be a Lifelong Learner at the University of Leeds, Faculty of Performance, Visual Arts and Communications. and get to lounge on their chaise lounges. I still don’t have a career or educational goal, (I’m ‘retired’), and I no longer aspire to ‘look the part’. Some of the text books still have the fly leaf of Bretton Hall College, that gives me a buzz. In a very roundabout way I’ve come to be that lounging student at Bretton Hall. My ‘study’ involves a lot of sitting, contemplating, and procrastinating about deadlines. Life lessons have taught me much of what is discussed formally, but it’s reassuring to have academia, at least Cultural Studies, confirm that my long term ill ease with main stream thought is a valid response, that’s been good for my wellbeing.
As each year passes past and present moments mingle, these are the things that remain. I try to live without regret or ‘what ifs’, ‘navel gazing’ helps me remain buoyant in the oft choppy waters that mental distress, its residual effects, diagnostic labeling and its treatments stir.