Having a sense of achievement for the things we accomplish, is vital for good health.This month has been an opportunity for the Gypsy and Traveller community to do just that. June is the Gypsy Roma Traveller History Month.

The Gypsy and Traveller community have many valuable achievements to be proud of, and LeedsGATE is a local  project that works towards ensuring that positive profile is upheld.

LeedsGATE also actively promote good health for its members. It is well accepted that good health is a balance of emotional and physical wellbeing. The following old gypsy proverb, additionally names other valuable tenets of good health, 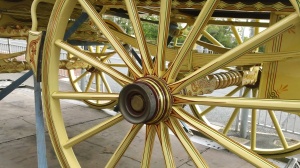 ‘good health, aside freedom and love’.

This old proverb sounds like a salutation, or blessing. It reminded me of the expression ‘Peace’, adopted in the sixties  when wishing others well.

Last year LeedsGATE held an event which focused on the health, and wellbeing of its older members, and I was fortunate to receive an invitation to it. Locating the ‘site’ that day, took me a while.  The promise of seeing a traditional gypsy wagon, had me convinced I was looking for a gated campsite location!   LeedsGATE.  is of course the acronym for the project.

The outdoor log fire, complete with ‘chitties’ (fire irons), was a clue I was in the right place, as was the grand entrance of an ornately dressed 113 year old ‘lady’. This Queen of the road was being carefully and reverentially wheeled in to her pride of place, ‘she’ being the traditional bow top wagon I’d been keen to see.

As Brigid demonstrated her  craft, she related, in soft Irish tones, how on her world wide, wagon trails she had hawked similar hand crafted goods. Another member was making a valiant attempt to make a peg, from an elder twig. As they worked, a wistful acapela Traveller ditty played in the background, evoking a sense of those seemingly more romantic times. 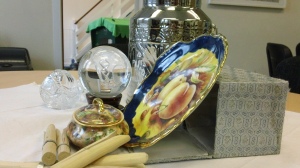 Sentimental as we might feel about aspects of those traditions, it’s not difficult to see how lack of basic amenities was hard on ageing or sick members. Travelers who still live on camp sites today continue to face many similar disadvantages.

The practicalities of living in the limited space of a traditional wagon must have been difficult even with a small sized family. During cold weather an indoor stove would have sufficed for heating and cooking, but outdoor camp fires were commonplace. Traditional crafts would have been passed down from generation to generation in such settings.

It was interesting to see  members utilizing the skills of the digital age alongside the traditional ones. Laptops and ipads were being used to ascertain some of the information I’d requested about the history of the wagon on display. Leeds GATE’s website is a credit to the community, it is an interactive, well designed  website. it includes a blog, that has informative news and personal stories pertinent to the community.

The wagon  (vardo) on display was built in Rothwell Haigh by Bill Wright, 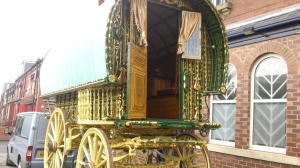 A peek inside showed how compactly and attractively it was designed, and demonstrated the skill that had gone into its making. The roof and sides, unlike other styles of wagons, was not made of wood.  a canvas was stretched over  its wooden bow shaped roof frame. The wagon had served many years as a home, and was later sold to an American museum collection,  In 2004 it was resold and brought back to Leeds, repainted by John ‘Yorkie’ Greenwood, who is one of the most accredited wagon painters in the country. The wagon is still used as a holiday home and displayed at fairs.

Although not all gypsies and travelers choose to live in caravans, as a community they face intolerance for other traditions they do still uphold, and indeed for their ethnicity alone. Gypsies and Travelers remain the most marginalised ethnic group in UK today. My further internet research revealed that common misconceptions, and prejudices are held about both ethnic and non-ethnic Gypsies and Travellers.  Marginalization of the group has obvious negative implications for their social, physical and emotional wellbeing.

Of the approx. 300,000 gypsies and travelers living in UK and Ireland, half live in conventional housing, with the remainder choosing to live on either public or private permanent caravan sites. Although some prefer to remain nomadic, for others it is an enforced necessity.

The two main ethnic groups in this country are Romani Gypsies and Irish Travellers. Both groups share some cultural traditions but have different languages and belief systems, Romanis are recorded as having lived here at least since the 16th century. Distinct again from these groups are Romas, who are immigrants from Eastern Europe. In addition there are French Manush, Scottish Travellers and Showmen.The name gypsy was once considered to be a corruption of Egyptian, however modern linguists trace the source of some of the language to India.

During 2002  gypsies and travellers, supported by the University of Sheffield, conducted national research about the group’s health needs. The outcomes showed evidence that some stressors of the life style impacts on their longevity. Nonetheless the care and respect of older, or sick members is still a strong part of this community’s tradition.

Leeds GATE have a library and are also currently planning a Heritage project, (nice ditty accompanies this video clip).The University of Leeds, Brotherton Library have a  Romany archive.  A visit to the Gypsy Poet website has exquisite images that will  fascinate and inspire.

This site uses Akismet to reduce spam. Learn how your comment data is processed.